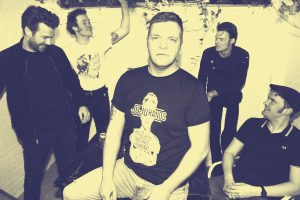 A brainchild of the songwriting bass player Rogier Heumakers of The Shining, the band started as a project channeling his love of early Oi! and street punk sounds. Scouting among his likeminded musical peers he pieced together a line up consisting of Lionn and Paul, formerly of Wanderlust, on respectively drums and guitar, Steven of Lords of Altamont on second guitar and his old band mate from The Works Marko on lead vocals.
Armed with a bag full of riffs, they churned out a handful of tracks in Steven’s Studio Mono and decided to record them earlier this year.
While the street flavor is still there, the songs evolved incorporating different influences that the band members dig. Balls out punk rock with a hint of pub, glam and garage rock.

Their debut full-length, Trench Warfare, was released in Spring 2019 and has gotten nothing but positive reviews from basically all over the world. In support of that record the band has toured in Germany, France, Eastern Europe and the US.

Listen to their releases here: https://savagebeat.bandcamp.com/releases

Get a glimpse of what they’re capable of live here:

For bookings and more information: sam@aucbookings.com